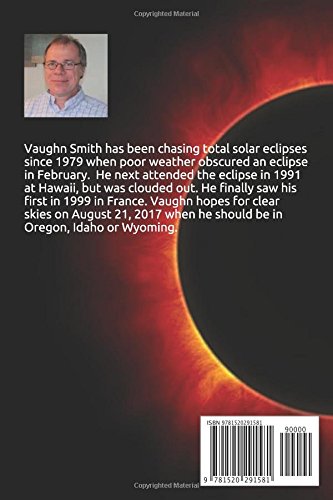 Before we summarize this guide, let us diverge onto a tangent. If you’re not interested, simply click here.

I’ve added  Vaughn Smith’s book to our product list because I noticed something interesting about his adventures. He’s set aside the time and the money to see the last two American solar eclipses, and in his brief summary of his recent eclipse chasing, you can tell that getting a perfect eclipse-viewing experience was no walk in the park.

For the February 26th, 1979 solar eclipse Vaughn was on Vancouver Island, but his plans were hampered due to a storm.

In 1991, he travelled all the way to Hawaii, but, again, was hindered by low clouds during totality.

Finally, in 1999 he went to France for their solar eclipse in August. On the morning of August 11th, his chances for seeing an unobstructed, pristine total eclipse was, yet again, in limbo. Fortunately, he and his compadres got in the car, drove to a village nearby, and was given the opportunity to see the final partial stage and all of the total phase.

Why is this important?

This man probably spent thousands of dollars. He travelled to various countries. He waited nearly two decades–all for that sweet, sweet eclipse totality.

And, we’re going to have one on our front doorstep that will 13 states. No travel. No expensive flights. And, all you have to do is wait a couple weeks. We talk a little about the uniqueness of this year’s eclipse in this blog post: Four Reasons Why You Shouldn’t Miss this Year’s American Eclipse.

Vaughn Smith’s guide to the August 21st 2017 solar eclipse is one for those looking to skip the scientific or astronomical explanations found in other guides. Smith condenses the how-to’s and recommendations into popular eclipse locations (like Salem, Oregon, Madras, Oregon, Casper, Wyoming, Kanasas City, Missouri, St. Louis, Missouri, and Nashville, TN, for example). He dedicates a section for municipalities, traffic near hospitals, security, and various other contigency topics.

So, if you’re looking for a guide that’s more focused on the people-planning, communal, location-based aspects of this year’s eclipse, then Smith’s guide may be the one for you.

eclipsegoods is a participant in the Amazon Services LLC Associates Program & Society6 Curator Program. Both are affiliate advertising programs designed to provide a means for sites to earn advertising fees by advertising and linking to eclipsegoods.com.